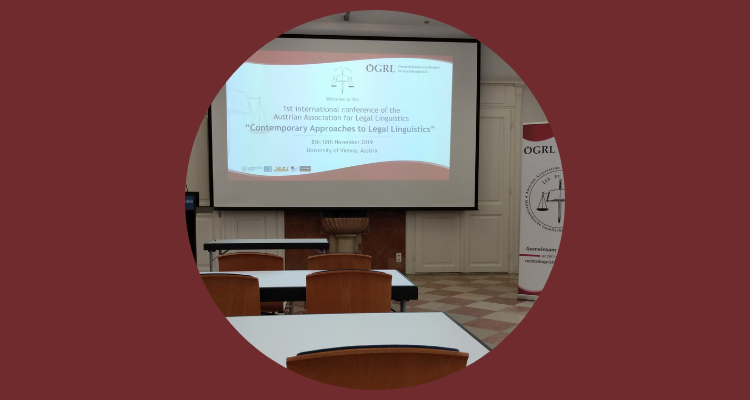 As it provided a lot of food for thought and my live tweeting skills are non-existent, I’ve decided to share my notes from the presentations I went to in good old-fashioned bullet-pointed style.

If you’re interested in anything legal or linguistic, I hope you find it useful.

AI and the Robot Lawyer – TechReg and Smart Regulation

How will your emergency be interpreted? An exploration of communication officers’ influence over the transformation and interpretation of emergency calls and police incident logs

• An emergency call is interpreted twice, before a decision is taken. Firstly, by the communication officer taking the call and, secondly, by the radio dispatch operator.
• The emergency call is registered on an incident log and its level of emergency is categorised (5 levels or grades).
• The incident log includes a free text field, where the call handler can write comments. They write their own interpretation of the events, not a verbatim rendering from the caller.
• Despite the importance of communication officers, who often deal with dangerous and life-or-death situations, their role is an entry-level position, which does not require formal qualifications.
• Professionalising the role of communication officers through extensive training in highly-effective communication and writing skills is key to minimise the risk of wrongly categorising an emergency, be it at the first or the second stage of the call handling.

• Questions asked in the study: ‘How is dissent expressed?’, ‘How do judges express their personal opinions?’
• ‘Surely’ appears more frequently in dissenting opinions.
• UK judges do have a voice, which is apparent in their judgments by the presence of personal pronouns, politeness markers and emotionally charged lexis.
• There are substantial differences between Civil Law and Common Law systems.
• Legal culture impacts the discursive practice.

• Everything the Law touches is also touched by language.
In Austrian criminal proceedings:
• Statements by victims are rarely transcribed verbatim by the interviewer.
• ‘Text trajectories’: the text changes across the different stages of a proceeding.
• Language does not reflect the social reality.
• Terms used with a modality in mind may have a bearing on the outcome.
• Precision vs vagueness influenced by the power hierarchy in the courtroom, between laypersons and legal professionals.
• The context never travels with the text.

• Future online courts will focus on the court user (rather than just legal professionals), with the aim to improve the accessibility and efficiency of the justice system.
• When comparing (New Zealand) claims presented by litigants in person vs lawyers, it is noted that pronouns are much more frequently used by litigants in person. They also use longer sentences, more verbs and focus on interpersonal relations and feelings.
• A question arises: who does actually fill in the forms (e.g. witness statements)?

EU translation through the lens of corpora: A genre profiling of the Eurolect

• Through translation, EU discourses show an increasing level of hybridity, which has led, as a result, to distinct ‘Europeanised’ variants of national legal languages (Eurolects).
• Eurolects have developed specific terminology, style and grammar, which differ from certain conventions of national languages.
• A Eurolect can have, in turn, a broad range of genres.
• Four legal and semi-legal genres. As per the EC DGT classification:
1. Legal documents;
2. Policies and administrative documents;
3. Information for the public; and
4. Input for EU legislation.
• Traces of interference can be noted in Polish texts, such as a more frequent use of the passive voice and subordination.

A corpus-based comparative analysis of evaluative language in judicial decisions: Legal language and the expression of emotion

• The study compares how emotions are expressed in judicial decisions.
• The UK and Spain are the second and fourth countries receiving non-EU people, respectively.
• Question: can differing legal systems condition the way in which legal actors express appraisal?
• Hypothesis (confirmed by the study): civil law legal systems (codified law) may inhibit the expression of emotion, while common law systems (judge-made law) leaves more room for subjectivity.

• A harmonised bijuralism doesn’t simply merging common and civil legal systems.
• Linguistic harmonisation must be adopted, too, because language is crucial in the development of the law.
• The main challenges in Canada are due to practicing common law in French or practising civil law in English, because certain terms are hardly translated.
• The paper suggests renaming some legal concepts related to fiduciary relationships in order to help the process of translating concepts non-existent in the target language legal system.

• In Austria, there are three ways to implement EU Directives:
1. by creating new legislation;
2. by amending existing legislation;
3. by adding new sections to existing normative texts.
• During the implementation process, both legal and linguistic issues may arise.
• Some questions about legal issues: ‘Who is the competent authority?’, ‘Is there legislation in place to change or is new legislation needed?’, ‘Who is responsible?’
• Some linguistic challenges are EU language using terms not compatible with the national legal terminology and EU legislation introducing legal structures that do not fit the system of the country.
• An example of the EU legislation introducing a legal structure not fit for the Austrian system is ‘independent authority’. In Austria, the courts are independent, but authorities are not. However, the law has provided a loophole (two non-independent people + independent judge = independent authority).
• All language versions of a directive are official and binding.
• Recitals are useful to know what directives are about, but they are not binding.

Representing gender in French legal varieties: From the supranational to the national dimension

• Forms associated with inclusive writing are still discourages in numerous French legal settings.
• The analysis looks at whether EU legislation encourages gender awareness when translated and implemented into French national law and where French Eurolect has been positively affected by inclusive language guidelines published by institutions.
• Job title names can influence the perception of an occupation.
• Solutions: 1) binary gender forms (preferred so far), and 2) gender neutral forms.

• Laws have been created mainly by men, so they reinforce male values.
• Gender-inclusive language is necessary to avoid bias towards a particular gender or sex. In legal language, it is key for achieving clarity and precision.
• Three corpora are analysed: 1) Greek corpus of EU directives, 2) Legal instruments used to transpose EU directives into Greek law, and 3) General Greek legislation unrelated to the EU.
• There is a lack of clear policy on using gender-neutral language in Greek legislative drafting.

Point of Order: Argumentative strategies in the floor debates of the Texas Legislature

• Analysis of argument strategies used in floor debates regarding the bill that allowed carrying concealed firearms in higher education centres.
•Gun legislation is highly divisive. Very unlikely that members of different parties found some common ground, so reasonable substantive argumentation has become something frustratingly unproductive.
• Texas lawmakers have changed their argumentative strategies; trying to obstruct institutions or opportunistically dismissing procedural rules.
• Texas is a Republican hyperpolarised state.
• Minority amendments are tabled, and points of order overruled.
• One party rule. When you win, you have the chance to make it even more difficult for the other party to win the next election.

Does legal language disadvantage women: A case of the Swazi national courts

• The paper examines how lexical choices in linguistic discourses contribute to sustaining or subverting old ideas of manhood and womanhood in Swaziland.
• Swaziland has a dual system of governance: common law (Roman-Dutch) and a traditional customary law (where all members are men).
• The accused is guilty until proven innocent.
• In customary law trials, women’s appearance, language and behaviours plays an important role in the outcome.
• Taboos. Women resort to creative euphemisms to refer to body parts, as they are not supposed to refer to certain body parts by their usual denomination. This hinders communication when reporting sexual offences and going to trial.
• Patriarchal society. It sees women as men’s property.
• The connotations of power, authority, coercion and fear in the courts are reinforced when one half of the population are silenced by cultural ideologies, such as linguistic control.

• Open texture of legal language (by Herbert L.A. Hart): legal terms have a solid core of meaning covering most typical factual situations and a penumbra where borderline cases may arise.
• Prototype theory: semantic and lexical categories are built around the most typical member of a category (a prototype), which means that belonging to a category is a gradable feature.
• The open texture theory provides short practical solutions.
• The prototype theory provides judges with more tools for argumentation.
• Despite their differences, both theories seem to describe very similar linguistic phenomena.

• Two approaches regarding legal literacy: narrow (being able to read and write legal documents) and broad (being able to understand words, draw conclusions, and take action).
• A degree of competence in legal discourse is required for a meaningful and active life (Steininger & Rückel 2013:1655).
• In Austria, a participation gap in the normative space is perpetuated by the lack of legal competence in secondary education.
• This study (pending results) argues that introducing language and law subjects into secondary school education curricula can be beneficial to students.
• Test: Language and Law as been introduced into GRgWikuRg für Berufstätige (Vienna) secondary school as an elective subject for a year. The aim is to help students develop critical thinking, problem-solving skills, analytical writing and research skills.

In the image gallery below, I share three poster presentations. 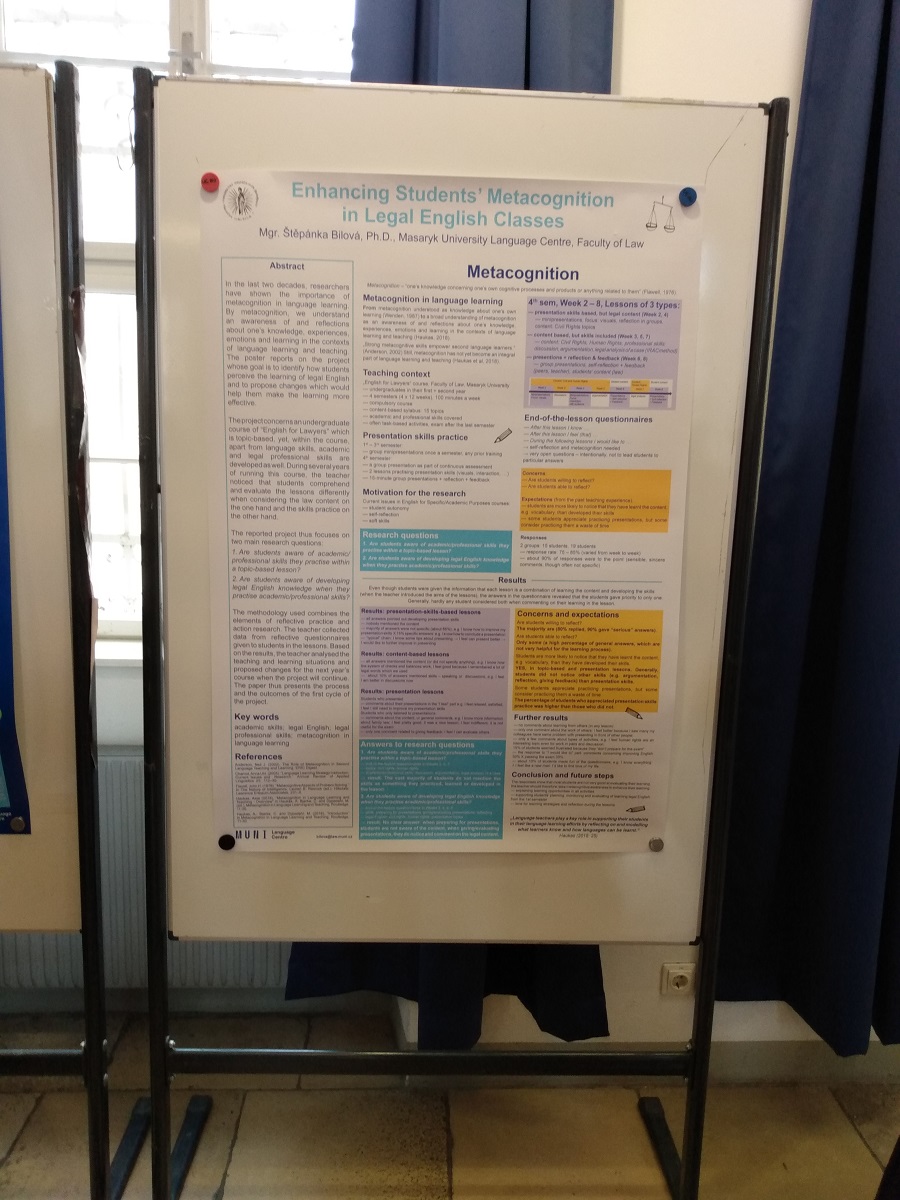 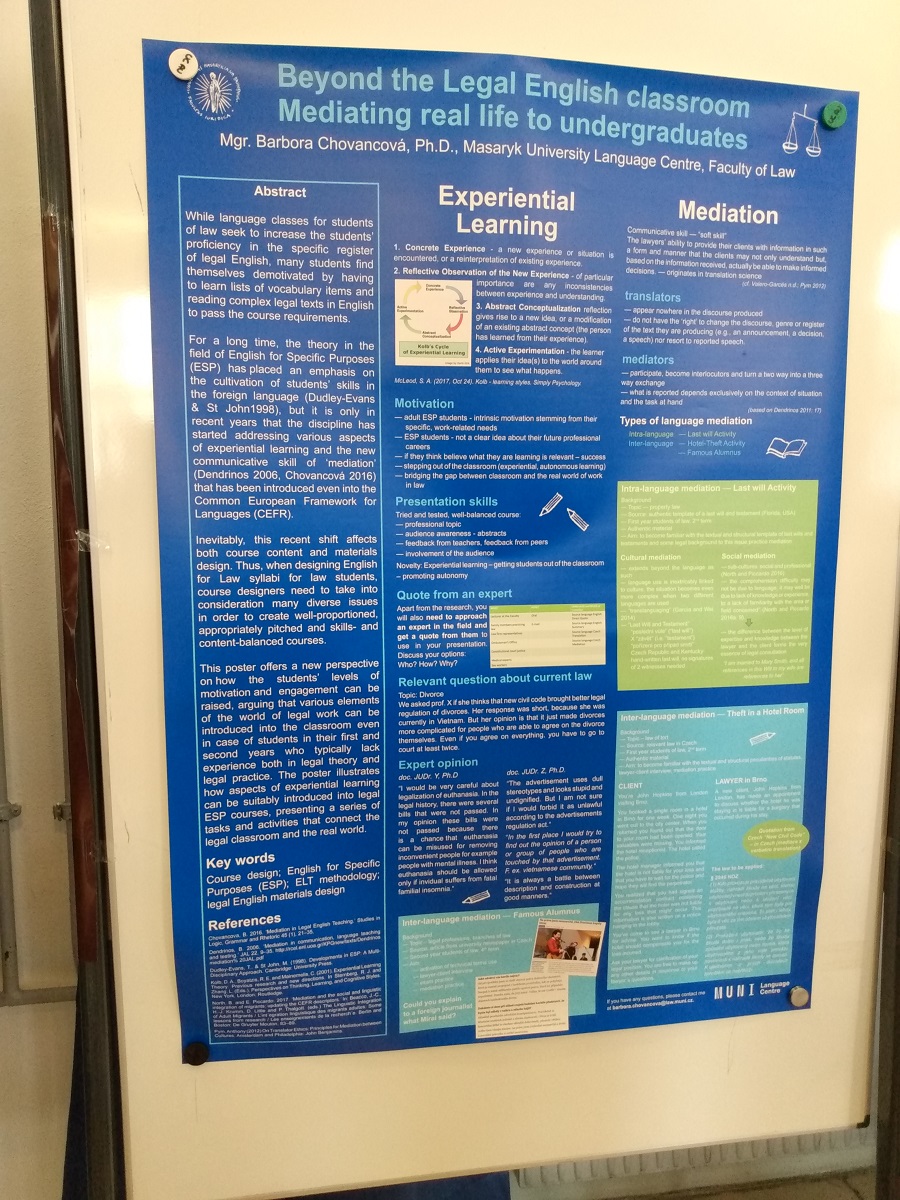 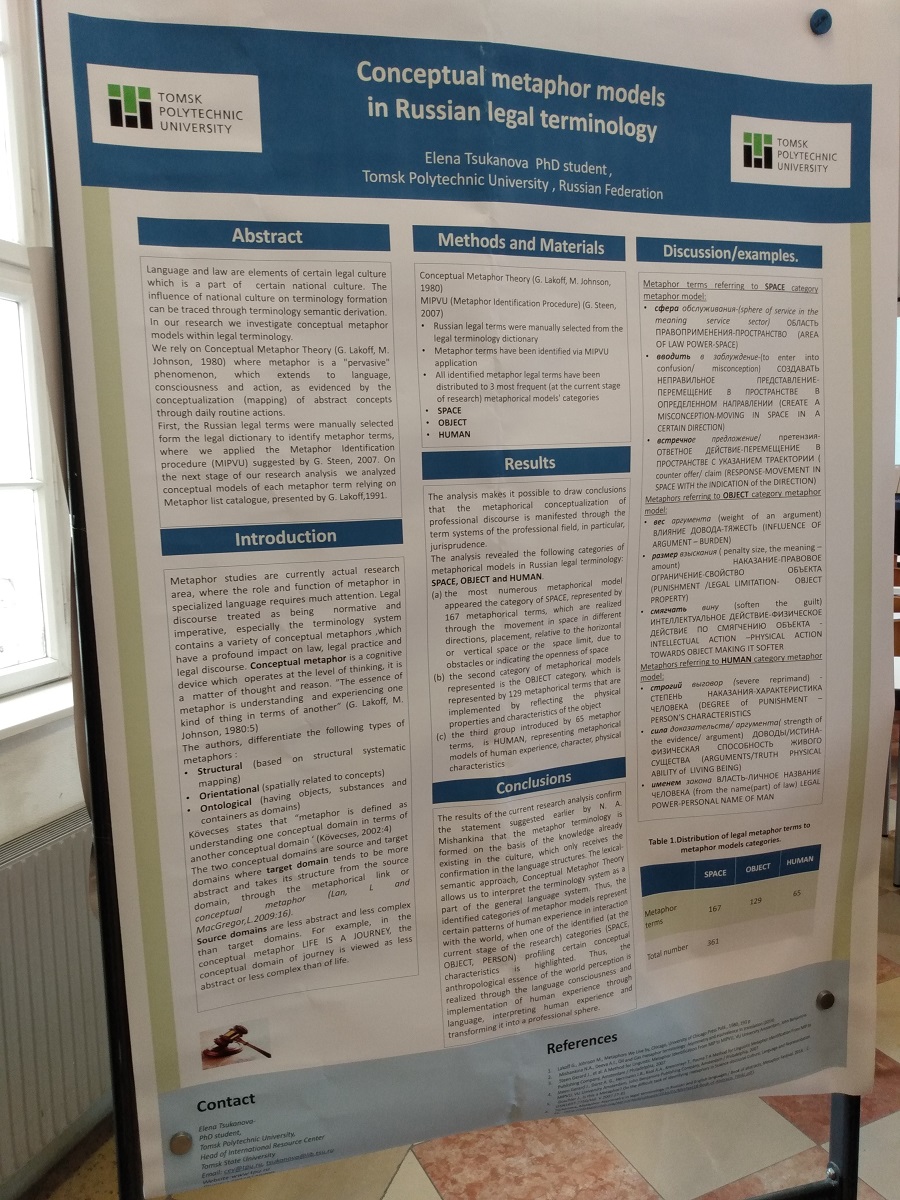