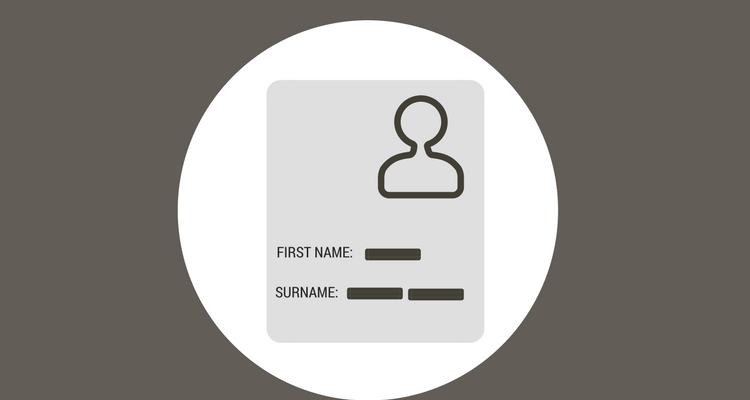 (Last Updated On: 16th August 2021)
As a Spaniard living in the UK, you will not believe the amount of trouble having two surnames causes. The UK is such a multicultural country, one would think British authorities, banks, institutions and companies are used to people following different naming customs. But the truth is, they are not. They are confused. Not only they are confused, but sometimes they think you are wrong. More often than not, I get corrected when filling in a form. I cross out the middle name field and write my two surnames in the surname field, only to be told I did it wrong. And then it is when I have to explain the Spanish naming customs.

Spanish names do not follow the first name + middle name + surname structure. They are made of first name + first surname + second surname. Exactly. Spaniards do not have middle names, but they do have two family names. For example, my full name is Irene Corchado Resmella.

First names can be made up of one single name (nombre simple) or two (nombre compuesto). Classic compound names include José Luis, María José, Juan Antonio or Luis Miguel. In Spanish, compound names are considered a single unit – your nombre – so the second element of your name is NOT a middle name, but part of your first name. Many use a shortened version of their compound names in everyday life: Marijose (María José), Juanan (Juan Antonio) or Luismi (Luis Miguel).

That said, some compound names can remind of middle names when they are not one of the ‘classics’. For example, your parents may want to call you Roberto and, due to family agreements or pressure, they decide to also call you David after your grandfather, for example. You end up with Roberto David as a first name, but you will probably only use just Roberto in your everyday life.

Let me illustrate it using a made-up family tree: 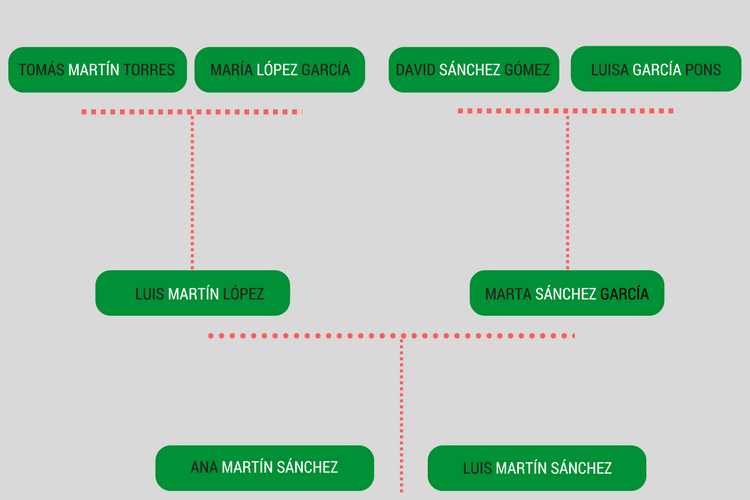 As you can see, your family names are actually your grandparents’, inherited through your father and mother. This means all siblings share both surnames.

Usually, your dad’s surname will go first, followed by your mum’s. Until 2000, parents could choose to reverse the order, but needed to submit a statement confirming they both agreed. If they did not agree, legal preference was given to the paternal surname, but not anymore. A new law passed on 29 June 2017 (it came into force on 30 June 2018) eliminating the ‘your dad’s surname first’ default option and allowing parents to decide which surname goes first within the first three days after their child is born (the same order will apply to all future children). If no agreement is reached by then, it is up to the Civil Registry’s officer to decide the order of the surnames.

Some questions you may have about Spanish surnames:

What if you have two dads, two mums or are born to a single mother?

The legal requirement is to have two surnames, so the only question here would be which surname goes first. If you are born to a single mother, the common practise is to adopt your mum’s two surnames (everyone has two, remember?).

What about double-barrelled surnames?

What happens to your surnames when you marry?

Nothing. Your name does not change. In Spain, the tradition of women adopting their husband’s family name does not exist, and it is a custom I (and most Spanish women would agree) find weird and do not understand. There are no maiden names or married names. You simply have your name, which you do not give up or change.

How do you refer to families?

As people keep their names, you cannot refer to a married couple as Mr and Mrs anything, because they do not share surnames. There is no familia Martínez, for example. You need to refer to a family using the children’s surnames. For example, my family would be familia Corchado Resmella (referring to my parents, me and my siblings).

Naming customs vary in different countries and cultures, so there is no right or wrong, better or worse naming system. There are only different systems.

Speaking as a Spaniard, I find our system more useful and practical than others, because it avoids all the hassle and paperwork involved in changing your name.

For example, a Spanish mum travelling alone with her child will not be questioned at the airport about whether she is the child’s mother or not, as it often happens to foreign mothers not sharing a surname with their children.

In the UK, I know of divorced women who keep their former husband’s surname so they and their children have the same surname. As a Spaniard, I find it quite creepy to carry someone you used to love’s surname, although I understand the reasons to do it. In Spain, there is no such problem, as your children will always carry your first surname as their second (or first, if you and your former partner decided to reverse the order).

Not changing your name also makes it easier to trace back your ancestors, as you can work out everyone’s siblings and parents through surnames in an easier way than in other cultures.

Apart from the practicality of our naming system, we Spaniards feel our full name is our identity, it is who we are. Adopting my husband’s family name for me would mean giving up who I am, giving up my family and my roots to become someone else. This is not because I am a woman and women in other countries give up their names. I feel the same about men and I would not like my partner to adopt any of my surnames. Marriage is, for Spaniards, a sum of two separate individuals, each with their own identity and name.

Moving to Spain: surnames and IDs

When you move to Spain, you will need to register at the Registro de Extranjeros, and you will be assigned a NIE. It is required for all sorts of procedures, from working to opening a bank account or have access to the national health insurance system, and it includes the person’s full name as it is.

Things change when foreigners residing in Spain apply for the Spanish nationality. Once you become Spanish, you will be issued with a DNI. As Spaniards must have two surnames, you will have to come up with an extra surname. Many foreigners choose their middle name as first surname or use their mother’s maiden name as second surname. Basically, you cannot be Spanish and not have two surnames.

Moving to Spain? Getting married to a Spaniard? If you need the services of a Spanish sworn translator, get in contact today to receive a quote.

IRENE CORCHADO RESMELLA is a Spanish translator and content writer based in Edinburgh. A Spanish sworn translator and Chartered Linguist, she specialises in Legal, Marketing and Travel translation. Irene combines her linguistic skills with her knowledge of content marketing and a creative mind to help you get the right message across to your Spanish clients.
Blogger at Piggy Traveller and The Curiolancer.